I’m thinking about how, when I write about this trip, I will describe the terrible beauty of Havana – “rack and ruin “ is not quite right. Maybe, “wreck and ruin”, or “ravished and ruined”, to keep the alliteration. Ah, look at that lovely colonial style church in bright ocher and brown across the highway. I’ll get closer to the curb to get a better shot. Umm- I see two men walking toward me. Let’s get this shot before another car blocks the building, but no! I see the men run at me, one of them with his hands stretched toward me. My automatic reaction is to stiffen, pull my arms tight to my body clutching my camera, tote under my arm, pressing my small bag against me and starting to scream from somewhere deep in my chest. The man with outstretched hands grabs each side of my small bag while the other blocks my movement to the right. To my left is the highway with cars whizzing by. The evil looking stranger starts yanking on the bag and after the third jerk, one side of the shoulder strap snaps and he runs into the traffic with the strap trailing behind him on the roadway. His partner is right behind him.

When I see a break in the traffic, I run after them continually screeching, and follow them, diagonally across the vacant lot where they have disappeared around the corner  of the next street. My thinking is they might just take the money and throw my bag down. When I get there, the street is strangely empty. Suddenly I am in touch with how surreal this whole, horrible nightmare is and how alone I am on an abandoned lot, in the glaring sun, hearing only the busy, noisy thoroughfare in Havana, Cuba where I don’t even speak the language. I whirl around and run back to the roadway, cross between several slow moving antique taxi cars, leap onto the promenade, and I still want to scream. I look searchingly at a few of the people standing and leaning against the cement balustrade that saw the entire episode and have not even moved.

Their lack of engagement is especially frightening and I decide to run to the Hotel National as fast as possible. My mind is thinking very fast- what is the best thing to do? I have to do something! Everything was in that bag- my passport, $600 U.S., $200 worth of CUCS, $100 in Euros, my driver’s license, the I Phone with all my precious memories recorded on I Photo. I can’t leave the country without a passport and a visa. There must be a way to backtrack to a different ending.

I decided the best thing would be to find Geo immediately. He will know what to do since he is the leader of this excursion and has been bringing Americans to Cuba regularly. Just as I reach the stairs at the entrance to the Hotel, Geo is coming down. When I see him, the adrenaline I’ve been functioning on fades away and I can hardly get my story out, I’m so breathless. He takes me to Hotel security, they summon the police, I get a replacement keycard so I can enter my room and find the copy I brought of my passport. About forty five minutes later, the police come and I find out that I  cannot even begin to get a passport replacement without having a completed document from the police. I spend the time from six P.M. until eleven that evening at four different police stations.

Now I get to find out a lot more about Cuba then I had experienced so far. The young policeman only speaks Spanish, so Geo has given me one of his very nice local employees to accompany me and do the translations. In the first station, the first thing I notice are very old manual typewriters tilted on their sides and I think someone must be collecting them. Later, they tell me the computer system is down. A policewoman is writing all the information they are collecting from me, by hand with carbon paper between the copies. When it begins to get dark, little moths appear and start dive bombing some of the police, but leaving me alone. The station does not seem to be very busy, I don’t see any other victims around and certainly, there are no other gringos like me. The lights start flickering off and on. We get into a squad car and drive to another station to finish the report. You can tell by their nonchalant reactions that interrupted electricity and downed computers are common occurrences. They just continue doggedly, conscientiously and routinely moving through the process of making a complete and thorough report, at the new venue.

Different policemen are called to pick me up and take me to the scene of the crime and I’m able to show them the exact spot where I was robbed. Of course, it looks different at night and really scary, with the sea wall holding back the the ominous black ocean and three or four people skulking around, looking more threatening then they did in the  afternoon. I then remember that I never saw any boats or even fishing vessels during the day or the night in Havana except one huge colorful container ship leaving from the fort area that afternoon before I was ambushed. 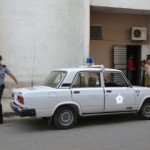 My escort tells me, as we wait at the police car by the vacant lot, that the police never carry guns, except when going to arrest a known armed criminal, but they are all trained in the martial arts. I did not see any officers that looked like the “donut-eating” cops in NYC. They were all fit, like they could take someone down easily with a kickboxing maneuver or any other move they executed by surprise.

Then we are on our way to yet another police station and that’s where they want me to do a composite on the computer of what the criminal looked like. I remembered very distinctly what the man who snatched my bag looked like, however, I could not remember a thing about the other person that blocked me on the right. I drew a picture of the purse snatcher’s face, with the hollowed cheeks, hungry black eyes and a straight pencil thin mustache. He was wearing a red and black shirt and skinny black pants that hung on him. He had a cap- a baseball cap on his head, but it didn’t look right when I drew it. Later, I realized that the cap had been back on his head with his black hair curling out, instead of forward over the forehead, the way my drawing was. His mouth was thin lipped and he was grimacing. They asked me many times what color he was and I was sure he was not black and not white, but cafe-au-lait Spanish looking. 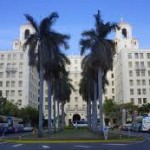  Their technician was finishing a different case and now they said the entire computer system was down throughout the city, so they said they would pick me up at 8:00 in the morning and bring me back to the station. I was driven to my hotel without the papers I needed to try to get another passport. Tomorrow was our last day in Cuba. It was going to be very tight timing to get to the embassy and attempt to have what I needed to get out of Cuba as scheduled.

They were there on time to whisk me to the last Police station I saw the night before. I sit with the policeman in charge of this process operating a computer that is very slow and awkward. No wonder the system was out the night before, it’s the vintage of the first computer I had back in the 80’s and I’m amazed that it works at all. There are several fellows that seem to me to be detectives sitting around listening in, throwing out questions to me once in a while and making comments that lead me to believe they know who the robbers are.

We begin the tedious process of looking at pictures of real people, trying to put a complete face together from pieces of others. Most of the men thrown on the screen were too young, too full faced and many were black or had negroid features. He couldn’t seem to come up with a very thin man, with thin lips that was at least thirty five or forty, had hollow cheeks and looked hungry. Nobody he showed me had a thin mustache- the only mustaches they had looked bushy, like Zapata and I was looking for Errol Flynn. He took some straight eyebrows from some fellow’s face to make into a thinner mustache. 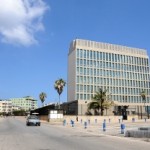 Finally, I declare we are done because, though I am not satisfied with the results, I feel this is the best we can do under the primitive circumstances. Copies are made and handed out to everyone sitting around the station. The female policewoman completed my papers, on what I had thought were antique typewriters just for show, using the carbons once again. I was taken back to my Hotel by 11:00 A.M. Now, Geo sent me with an American woman, that spoke Spanish, to the heavily guarded Embassy of Switzerland where the United States of America has an “Interests Section”. This was the first time I had been aware of any security being around in Cuba, except at the police stations.