Cuba – The Law of Averages

Cooped up in bus number five- two hours there, two hours back to the old Dupont estate, now owned by the Cuban government. Who knew Cuba was so large? Our guide points to the map on the interior, above the front window of our bus, showing us the route we will be taking. “This bus is made by China, so I always point to this red star and say this is “Chinese” Havana and we are going to this star, “Chinese” Matanzas, because the Chinese didn’t get the map right.” We all laugh at her ironic way of letting us know you could not count on the bus map to be accurate.

The trip is worth it- we get to see the countryside- how the land is just as uncared for as the buildings in Havana. Dairy cows and goats roam in many fields, explaining the good cheeses we ate at lunch. A lot of chickens are scratching in the dirt, definitely free range. Now we know there are the beautiful beaches of Veradero. Today was the first time we had fish as a main course at lunch instead of chicken. Many evenings, we had chicken as the main course again at dinner, most always, overcooked and harder to cut then tough steak.

I’ve been loving traveling around this week with 250 people that are part of a work study group discovering the arts in Cuba. Today, when I’m sitting at lunch in the former Dupont mansion, one of my table mates was very excited hearing about my book on public speaking. “Oh, what’s the name of it? Can l buy it on line? I do a lot of  presentations,” he says in his clipped accent. I couldn’t have picked a better group to travel with because every time I talk to someone, we have conversations that go somewhere. I haven’t had to make small talk like I usually do when traveling with a group of strangers-”where are you from, what do you do,” finding out quickly that we have nothing in common. 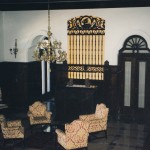 In our initial conversation, the second day in Cuba, my table mate told me about photographs he did in conjunction with his friend, a writer, that he is traveling with. They went up to the Phillip Johnson estate and created a book about it. His spectacular photograph of the Glass House is on the cover. Immediately, we connected because I have been to the estate and knew of the book. We were very animated talking about how special the property and buildings that Phillip Johnson created are, a virtual history lesson of 20th century architecture.

After lunch, the bus I’ve travelled in all week, is the first to leave and I have a lot of room to put my seat back and stretch out for a little nap, very comfy, after a couple of glasses of the chilean white wine with lunch. That seems to be the only white wine served in Cuba. We were also given a mojito before we sat down. Everywhere we have gone, we are greeted with this refreshing drink, though often we conjecture that there is no rum or lime in it- mostly sugar and mint. Mojitos are supposed to have white rum and of course, rum would be the national drink. It has generously been served in all the daiquiris and pina coladas I have been having each afternoon or in the evening before  dinner. After dinner, in a couple of places, like the Havana Country Club, they have put a bottle of dark rum on each table to drink like brandy out of little snifters.

I question our guide about the many working oil derricks scattered near what looks like a refinery, as we pass by. Cuba has plenty of oil, but it is cantaminated with sulfur and can’t be used for cars, though it makes Cuba self sufficient for other energy needs. Tall, slender pipes with natural gas flames indicate an abundance of natural gas. There seems to be little infrastructure though, to utilize the raw materials. 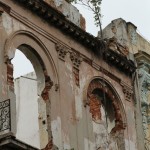 So now we are coming back into the city where all the buildings are smacked together- 16th, 17th, 18th century, three and four stories, leaning toward one another, holding each other up. Vast remains of a very old culture spread before us, with every era of architecture represented. Yet some are just facades, the interiors looking bombed out, as long ago the insides collapsed, leaving hollow windows. In some empty windows you can see the sky and there are people peering out of them because they still live there. The tears come to my eyes, as they often have during this trip to Cuba, because it is pitiful and painful to see such elegant and charming history in rack and ruin.

There are sewer smells all over. Several streets we have visited this week to get to lunch one day and to to an incredible Art Deco Era theater another day, were torn up, with clouds of dust rising from the slow process of bringing in adequate piping to such an old city. 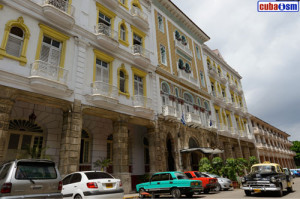 I recognize the Seville Hotel in the distance. We had lunch there yesterday complete with flamenco dancers and Spanish guitars. I was able to take photos of the city of Havana that stretched as far as I could see, from the balconies with French doors that surrounded three sides of the lovely room at the top of the Hotel. We drop some of our members off at the Seville Hotel before the bus makes the turn towards the sea wall on the way back to the Hotel National where the majority of our group have been staying for almost a week. People are casually lounging and walking the sidewalk that runs along the water. I have been so pent up in the bus for so long that I convince the driver and our guide to let me off here so I can walk back to the Hotel the rest of the way on the boulevard called Malecon, by the sea wall. One can see the Hotel National about five or six blocks further from where I get off Bus # 5. I’m so thrilled to be walking along the ocean with a wild cloudy sky above that is quickly clearing as the sun cast bold swathes in front of me.

Soon I get sunblock out of my tote bag and slather my face, put my sunglasses on and wish I had the big hat I have been wearing every day in the strong sun. I didn’t bring the hat today because it was drizzling when we left this morning, our only rainy day. Oh, how free I feel on my own, my light weight, small bag swinging across my body, I breath deeply. Bone by bone, I seem to uncoil from all that sitting on the bus and I picture my body walking very tall. I stop quite often to photograph interesting buildings lined up on the highway, all facing the ocean, with the new camera. I finally had time to get the camera I bought in New York before I left, out of it’s packaging, on the way to the Matanzas this morning. I read the instructions and began using it to capture the beautiful beaches, golf course and the poorly kept, yet luxurious interior details of the mansion. Until today, I had been using my I Phone and took some incredible shots of the myriads of Deco details we have been seeing all over Havana. Imagine what kind of pictures I’ll get with the new Elph!