13 years ago, I had no idea how external events would change me and affect my life forever. Though I started out handling it the stoic way I learned to deal with crisis as a child, this event turned out to not be containable. No, I didn’t have a loved one that died in the towers, I wasn’t even downtown when it happened.

It was a gorgeous day like it is today. Really clear skies, though fall is already in the air this year, as it was not in 2001. I went charging down the hall to catch the elevator and Jeff, a neighbor living on the floor I do, got on with me and said he saw on the Today show that a plane had crashed into the World Trade Center. I said, “It was bound to happen someday with so many tall buildings and small planes buzzing the skyline.” By that time, we had reached the ground floor. “Have a good day,” we said as I went out the service entrance and Jeff left through the main lobby. 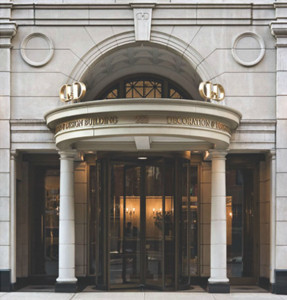 Now I was in my focused, fast walk mode and ran to catch the 57th street crosstown bus going in the direction of the D&D building on the East side.

A few cell phones began ringing as I sat down on the uptown side of the bus. It was the early days of the small hand held phones, and I had my disdainful thoughts about rude people answering phones on a bus. Their conversations about the plane at the World Trade Center, were leaking through my concentration on the New York Times. We came across 5th, I looked up from the business section in time to see what looked like a mushroom cloud- an atomic bomb shape I had only seen in old news reels, and it was puffing up from the southern tip of Manhattan. People stood up and pointed as we kept going to the bus stop by Tiffany’s. Most of us did not get off as none of us understood that the further we went from our homes, the longer our walk getting back would be that day. 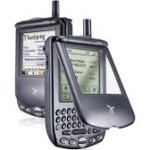 All the way to third Avenue, everyone was getting second hand information from the people they were talking loudly to on their cells. The fact that it looked as though a bomb had gone off way down town either hadn’t sunk in or I was already in shock and moving on automatic. As has been my habit throughout my life when encountering crisis, I was determined to not be distracted from my work. The priority in my life for next few hours was to look for a couch and drapery fabrics for a loft space I was renovating near City Hall and to meet with the designer at Einstein Moomjy to color a West Side brownstone owner’s custom carpet. 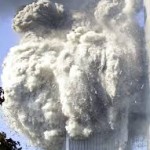 It was impossible to hold anyone’s attention in the D&D showrooms that day. We, the designers, sales people and clients, periodically all went scurrying to the back offices to see the televisions and the endless repetition of the planes hitting the Twin Towers and then the shocking collapses of the buildings. The various broadcasts in between got worse with conjecture as the morning went on. We were all stunned by each new reality that was presented. I couldn’t stand feeling trapped by the TV anymore. I was slightly nauseous because I had been anxiously stuffing myself with the danishes they provided, as if I hadn’t eaten breakfast that morning. I left with a few sample fabrics that would have to do for now and totally let go of trying to zero in on an appropriate sofa.

After determinedly walking the few blocks to the Moomjy showroom, I encountered my salesman, looking stricken, wringing his hands and talking doomsday. My instincts told me that I needed to find the designer, at once. Though I did not know him well, I could tell from the few times I worked with him that he was a very focused person. George was downstairs with all the yarn puffs and he seemed happy to see me. We exhausted what we knew about what was happening downtown and I could tell, he was not ready to go home and deal with his fears and feelings yet either. 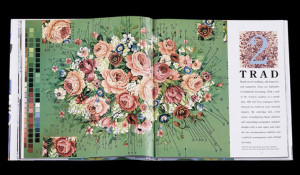 “George, I would really like to work on coloring the custom made carpet I ordered for my client the other day when we were here. Are you up for that?” I guessed right, he said he would be thrilled to work on beautiful colors and get his mind off of all the drama and death that was going on. 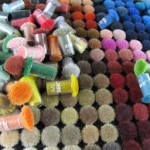 The two of us sat down with the lovely soft wool poms and began to organize the palette we planned to use on a very intricate custom made pattern. We struggled at first to concentrate, but before long, we were both fully absorbed doing the part of interior design that I love- creating beautiful unique items that will be in a space for many years, bringing pleasure and elegance to that environment.

George and I collaborated- he was a very secure guy when it came to this role he played with interior designers like me-there was little ego involved. “If we use a shade of rose that has some peach in it, then it will look better with the other warm colors we have chosen. The one we selected is too magenta.” “You are right-how about this color? It’s softer and now we don’t need the mauve in there either.” About two and a half hours later, we looked up from our successfully completed project and realized we were back in the real world again but that we were OK now.

George thanked me for making this respite possible, I told him how lucky I was to have found him to work with me on this extraordinary day. I think we both were enabled to get in touch with some kind of innate calming control we thought we had over our lives.

I was ready to make my way across town and face whatever the world would be throwing my way. The streets were filled with people instead of cars and I joined the throng walking west. I stopped on 58th and 6th Avenue and bought my first cell phone.