CUBA Part II: That’s The Way It Is Part II

I have just enough time to unpack and prepare for the first formal event of the International Art Deco Society being held in the Salon on the main floor of the Hotel. It’s a totally packed stand up affair, with a large portion of the Deco Society members decked out in their authentic clothes from the Deco era. A sense of gaiety prevails, while many things are happening simultaneously. There is a film about the Conference In Cuba playing on a huge screen at one end, transvestite looking models preening and posing in too many pearls, feathers and cigarette holders, as the worst hors d’oeuvres and watery drinks in the world are passed around to the hyper excited crowd. Announcements and introductions are made by our group’s leader, their Cuban counterparts and officials that have made it possible for this extravaganza to convene for a week in Cuba.

I leave the festivities before midnight feeling hungry. Opening a few of the miniature candy bars I brought for the locals, I gobble them down like a child at Halloween. The next morning, I dash down to the patio by the pool at the last minute assuming there will be a continental spread, and I will gather a few things to eat on the bus. Instead, the Hotel National redeems itself regarding the food from last night, with their very generous buffet breakfast that comes with the cost of the room. Spread before me is a whole counter where someone is peeling and cutting fresh tropical fruit for me to start my day with. There is a station where I get a custom made omelet, or I could have poached eggs. Another table is covered with a variety of rustic breads, rolls, muffins, a cold bar has cheeses, cold cuts and salads. At the hot bar I take a rasher of bacon and choose the crispy ones over those that are limp with fat. My favorite items at breakfast are the flat, chewy, triangular, filled pastries tasting like squished crunchy pain au chocolat. On the same tray are similar guava filled pasties that have become caramelized and crackly. They have a special taste I will long for until I get back to the Hotel National again. I’m running late now and wrap some of these goodies in a napkin and savor them as bus number five pulls out of the long horseshoe drive. 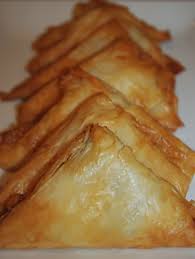 Like on all days of the trip, we have an agenda that is so packed, we will be on the road until at least 6:00PM, with dinners planned at 8:00 or 9. Our convoy of five buses take us immediately to the clean lined wonderful white washed, deco, empty, Festival House displaying a vintage poster collection. It has my favorite spiral staircase, with black and white checkerboard floors. Outside, we see the back yard’s empty swimming pool. From the roof terrace, I notice that this is a neighborhood of empty pools in disrepair, since their former life.

As I reenter my bus before leaving, I ask our guide about the empty pools and the condition of the buildings and she promises to fill us in as a group once we have completed boarding. On our way, the guide explains that before the Revolution, most of the homes were privately owned. Castro told the landowners that if they wanted to remain in Cuba, they could select one property and the state would be expropriating the rest.

We are cruising through a lovely well landscaped neighborhood where there is a vast disparity between the formerly stunning mansions. The places we visit are well cared for, restored and have become museums. The landowners that retained a property in this area have maintained them to an extent. Large mansions are pointed out to us that have been converted to medical facilities and schools and they are in good repair.

Some of the properties were given to people that had been in the forefront of fighting the Revolution. The rest of the large houses, that were given to people that had no place to live before the Revolution, can be shocking. Porches have been crudely converted to rooms, closed in by cement blocks. Extra stories may have been built on top with no regard to weather the building could sustain the extra weight, thus causing the foundations to cave in. We are told that five or six large families may be residing in one building. These citizens have no money to restore them. Paint and other raw materials are in short supply, there are no stores to buy anything, though I see a few old tools for sale at little roadside stands in the suburbs. The people probably don’t even own any tools or know how to use them.

Casa La Amistad, the house of Catalina Laza, is our next stop in this neighborhood where we see elegant examples of Art Deco in the interiors. Mario Coyula, the author of a book, “Catalina”, is our historian and he shares with us, what was at the time, the scandalous lives of the people that had owned this home. The National Museum of Decorative Arts, another former private home filled with Deco and other treasures, is where we have lunch in the garden after viewing it’s treasures. The outdoor tables are done up the way you would for a wedding-table cloths and bustled bows on the backs of the chair covers. The mandatory mojito is served while we see the first of many enchanting dance programs we are exposed to in Cuba. Luncheon is served and it is one of the few meals we have in this country that does not include chicken. We eat a quiche like item as the main course and dessert is an egg custard type pie. The main difference between the two is one is savory & the other sweet. During the meal, the beverages served are Sprite and Coke. Strong, dark coffee is appears in small demitasse cups and then we rush to get on our bus again.

The official academic presentations of the conference begin at 3:00 PM and by the time we arrive at the Casa Las Americas, all the seats are taken. I am pleased to stand when I realize that the seated people are mostly intense, long limbed, lithe local young people hungry to learn all about Deco. I’m struck by their beautiful skin, nicely shaped noses, Latin beauty and respectful demeanor for the subject matter. The conference is often in Spanish and throughout the rest of the week, we have headphones that give us simultaneous translations. The presentations today are about Deco influence in the Caribbean, except for one about the influence of the Mexican muralists in 1930 Chicago. 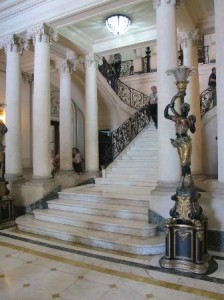 At 8:00 PM, our buses leave for dinner at the Club Habana, built in 1928 and known as the Havana Biltmore Yacht & Country Club, private and segregated. It is now run by the government. Our guide tells us that we are riding through the area of the city that Fidel Castro ives in, though specifically where is a secret because through the years there have been over 600 assassination attempts on his life, supposedly, by the CIA alone. As we bounce along to our destination, it is apparent that there is not enough street lighting to travel safely in the suburbs at night. Fortunately, for our skilled drivers, there is little traffic on the narrow roads. Abruptly, through a clearing, in the distance, we come upon a well lit, smart looking manor on the ocean that maintains an elegant Colonial atmosphere, though there will be the same State run food and service.

As we climb up the curved interior stairways, made for grand entrances, there are models posing again in deco inspired costumes. One hardly notices them as the people in our group have recreated the atmosphere of the building’s sweeping entry way in the thirties, dressed in their authentic period Deco clothing. I am amazed at my fellow traveler’s ability to pull their looks together in the hour we had between the time we were brought back to the Hotel and then left for Club Habana. I’m also thinking about how much overweight fees they paid, bringing the clothes and perfectly matched accessories from as far off as New Zealand and Australia.

After the obligatory welcoming mojitos, dinner is served about 9:00 in the large dining room with a small orchestra for dancing, as well as the front porch and the back terraces, facing the quiet empty shore and ocean.

In the morning for the next three days, I rush to breakfast at the last possible minute because I have been up late the night before. Regardless of how little sleep I have had, I want to be there for the first scheduled 9:00 International Art Deco Conference presentation of the day in the Hotel. With few exceptions, they are fascinating and given by members, authors and experts from all over the world that reflect the intense passion each lecturer has for their particular facet of Art Deco.