This is Part III in a three-part series.  Please click here for part I

During my time there, the Embassy makes calls for me to the U.S., contacting my bank to close the account on my debit card that was in my stolen purse and taking care of all the other stoppages needed to minimize any damage that could be done by robbers.  The police assured me earlier that the Cubans don’t have any international connections for identity theft and no one can use American credit cards in Cuba, including Americans, as I knew before coming to Cuba.   My policeman has said, through the interpreters, that all they were after was the money and they would quickly get rid of everything else because if they were caught with my passport or belongings, the punishment would be severe.

The U.S. Vice Counsel recommends I make the calls to the States anyway.  He seems surprised that someone robbed me in broad daylight with other people around.  According to him, that has not happened in a couple of years.  Another American sitting in the room with us, waiting for papers, says her passport was stolen one time when she visited and the police insisted nobody steals passports in Cuba.  Later, when home in the States, she got a call from the hotel where she stayed in Havana, saying she “had left her passport under the pillow” and they just found it!  I’m hoping that I will get a call like that saying I misplaced my iPhone and everything else that was taken and that they found it!

I am told I need to get passport photos. My God, how does one do that in Cuba?  We are sent out of the embassy, through the  security, across the Malecon to a small building.  We go down the steps to the ground floor apartment where a man has set up his photography “studio” in his little kitchen with his family standing around.  He sits me on a wood ladder back chair by the table covered with oilcloth, centered with bottled condiments and in one take, snaps my passport photo and gives me four copies of it, not taking more then five minutes. They are actually better then most passport photos I have had taken throughout my life. I hand his wife the two and a half CUCS requested and we rush across the street, through all the security outside again.  Three more guard points are inside before we reach the American Interests area that has a combination of buttons on the lock that have to be pushed correctly by the last sentinel before we again enter the American section.

I pay the cashier $135 that I borrowed earlier from Geo for my temporary passport.   The passport will last me three months and now I will be able to enter the USA.  I’m assured I won’t be charged again when I apply for the permanent passport. I’m wondering how, if I had been an American citizen in Cuba illegally, I would have been handled.  I have heard you can be fined up to $10,000 if it has been discovered that you snuck into Cuba via Canada, the Bahamas, or some other route.  I can’t imagine how awful it would be to have the theft experience that I did in Cuba and not be with a group of professionals like The Copperbridge Foundation to help me through the crisis.

Now I can relax.  I’m told I may be held up a short time at the Jose Marti airport when leaving, but the paperwork I have now should see me through, though I’m unable to replace my Visa. We escape from that little enclave of United States authority, through the security, picking up the items they had taken from our purses on our way in almost four hours earlier.

Lunch on the Hotel National Terrace

We walk the few blocks to the Hotel National, famished and looking forward to a late lunch on the terrace of the Hotel National, facing the sea on another sunny day in Havana.  I make my only purchases, besides books, stopping at a small craft market on the way up the hill using borrowed money once again.  A soothing pina colada and ham and cheese sandwich tasted like the best thing I had eaten since I got to Cuba, as we lounged in the huge rattan divan and chair. Tomorrow, we get on the plane to Miami very early in the morning and now I am feeling sad that I have missed a day of our group’s agenda.  What sight shall I squeeze into the few hours before our goodbye celebration?

Forget that!  I am once more greeted by my own very special policeman, as I walk back into the lobby.  He explains to me that he has come back to take me to a police station to look at “mug” shots. I start to resist, yet I know this is the proper closure to this episode and off we go in another police car with no springs in the back seats.  I know the man was there in one of those photos they showed me, but I could not be absolutely sure because none of the faces had the right kind of mustaches.  It wouldn’t be fair to  accuse someone and say I was positive, taking a chance on ruining the wrong person’s life.  Again, this was another grueling process, wading through photos of young, black, large featured men, looking for a skinny, short man closer to forty, with thin lips and hollow cheeks.  They even included showing me a picture of the composite we created that morning, only now he was wearing a suit and tie, without the cap on his head!

Back in the police car again, I said nostalgic goodbyes to these streets I had been hustled around so many times since yesterday.  Now they felt very familiar.  I miss them already, and I’m not even gone.  I long to travel around this corner and that square to see all the sights that were not revealed to me.  There is some satisfaction in knowing that I got to see a piece of Havana that nobody else in our group got to experience, though I paid for it dearly. 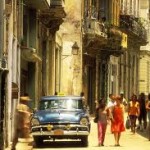 A Havanna street I did not get to explore!

There is just enough time left when I get back from my arduous “manhunt”, to change clothes before dinner, and maybe have another drink on the terrace while the sun is going down to our left. A lot of people lounging around the terrace bar have heard of my plight and want to buy me a daiquiri and I accept one while filling them in on the details of my experience.  I find myself explaining to everyone, that this could have happened anywhere.  With all the traveling I have done through the years, being ripped off by bandits was bound to happen, “It’s the law of averages,” I heard myself say.

The air is fragrant, not humid but enveloping me in a languid velour softness. I am feeling unfettered from the grip of the ordeals I went through for the last twenty six hours and I slip easily back to the life of a tourist absorbing the romance of a perfect Havana evening.  We all wander into dinner as darkness engulfs us outside.  So many members of the Art Deco Society are dressed in authentic clothing from the 20’s and 30’s. I begin to imagine that this is what it must have been like in the Cuba of the Great Gatsby era.

Our dinner is a very festive affair with big round beautifully set tables.  I choose a seat near the front because it looks like there will be action from the raised dais that is now set up with a bandstand.  After a lot of sincere thank you’s from our leaders, they bring on a wonderful big band like those one would have seen back in the fifties, except most of the musicians are young, in their twenties.  The sound is great- classic Latin favorites.  They serve us abundant, good vegetables, real potatoes instead of plantains, and tasty crunchy rolls so that we hardly notice the inedible chicken on our plates. 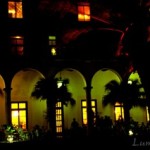 Cuban Romance at the National Hotel

When the tables are clearing, as people begin to sway to the infectious music, many scramble to give each other their cards so they can stay in touch until the next Art Deco Conference two years from now in Shanghai. One of my new “best friends” asks me to dance and we spin out on the dance floor allowing our bodies to surrender to the merengue, then a salsa, a tango and on and on.  We can’t stop dancing, laughing and being joyful, until the band stops playing and says goodnight. Everyone claps their hands in appreciation.  Those who aren’t dancing have been standing on the sidelines, not wanting these special parting moments in Cuba to end.  Now they disperse slowly, saying goodnight if they are taking the extension to other parts of Island tomorrow. Most of us leaving the country the next day are saying good bye.

My partner tells me what fun he had dancing with me and I tell him the same, as we leave each other by the palms on our way to different floors of the Hotel.  My bags are already packed in preparation for the early morning wake up call.  How fortunate I am, after all that has happened and all that did not, to be able to get into bed with the charming and enchanting aspects of this adventure filling my slumber.