Many clients have asked me how I learned so much about construction and I have told them about how fortunate I was to have been involved with building a home when I was about nine years old. For several years, I have been working on a book of memoirs and recently wrote the following story that I want to share with you about that period of time in my life.

My parent’s dream was to build their own home in the country. On the weekends, we would crowd into the car with my Grandmother and her husband, who lived in East Liberty, part of Pittsburgh, as we did, nearby. They were looking for cheap, empty property, outside the city. One day, we drove north through Etna, past Allison Park in Hampton Township, to an area called Gibsonia where Richmond township begins. We turned right off the highway, drove up a progressively steeper hill, dipped down the other side so you felt a little drop in your stomach, lurched around a blind corner at the top of the next hill & just before you would have to make another small dip, Dad pulled the car over.

We got out, crossed a little gully on the side of the road where the rainwater drained off, climbed up the embankment and saw a piece of almost treeless property, covered with buffalo grass that sloped gently down to a small creek. My father said it was our two acres deep property he had just bought, that had a big empty hill behind it and only one other house that we could see on that side of the road.

Gibsonia; You know where The Turnpike crosses route 8 North of Pittsburgh? That’s where we finally settled on Hardies Road, and it became my home until I left for College. I don’t remember having an opinion about the place at the time, I was just happy to know that my family was making permanent roots.

My father was almost manic with big plans that we were going to build our own house. He probably was only able to borrow enough money from my grandmother to buy the land. He had no idea what building a house entailed until we started going out there every weekend and learned by trial and error. The next Saturday, we were there very early in the day. The first thing Dad did was put up a primitive small sign that everyone could see from the road. It read, “Tooth Acres”, which he thought was a very clever play on words since he was a dental technician.

My brother, John and I loved it, just one big new exploration every weekend for months. Following instructions he must have read, and working from a plan made by our boarder, an architect, Dad pounded stakes in the ground and put string up to indicate where the perimeter of the house would be. He had bought shovels for all of us and gave us instructions to start digging what he called the footer. He explained that this would be where the cement could be poured and become the base on which the cement blocks would be laid to form the basement walls. The whole family was happily exhausted after a couple of days of digging a footer. 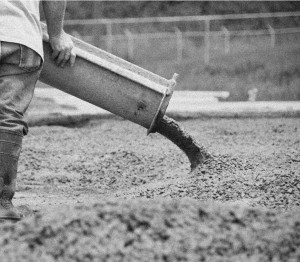 Eventually, Kenneth began to understand that we were not going to be able to do most of the work needed to build the basement and he began to hire people to join us. The first person came in with a bulldozer and he cut out a driveway about a half an acre in and scooped out a side of where the building would go into the hillside. Then he dug a huge hole for the septic tank. We continued to be involved where we could by hauling sand and gravel in a wheelbarrow, dragging cement blocks to the footer, and running errands. “Bring me some water, fetch the food from the car, run across the street and see if the neighbors have a level we can borrow.”

Soon a well was drilled where the pump house would be, before the walls of the basement, garage and the dental laboratory went up, all on the basement level. Plumbing was installed and electricity was brought to the construction. After all the drains were put in, an important day came when the cement mixer truck arrived with their crew and they poured the concrete floor of the basement as we cheered on the sidelines.

My father and a carpenter climbed all over putting beams across the top. They laid plywood flooring on the beams and finished that off with tarpaper on top. They installed metal floor jack supports every seven or eight feet to be sure the beams stayed in place. The plumber was installing a toilet, sinks and wash tubs. It wouldn’t be long now before we could stop using the little outhouse that had been put up in the back yard. A large furnace was brought in. The small windows were installed in the holes left for them near the top of the walls, though they let little light in because they were half covered by the dirt. One could enter the basement through a heavy metal entry door from the garage, which had a back exit and an automatic rolling metal garage door that coiled up and down.

A dump truck hauled a load of “bony” that was laid in the muddy driveway just in time for the Lundy family to move into their basement on “Tooth Acres”.